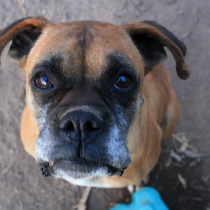 Three years ago we had moved into a new home with a yard. Our Beagle, Scooter, was alone in a house with a fenced yard for the first time in his life. Previously we had lived on a remote farm where he had other dogs, who had now passed on, and with cats; all without fences. Scooter was sad and gaining weight without companionship.

As his owner, I was looking for a rescue dog that would be good with him, our cats, and our children. One day a friend of mine shared this picture of Evelyn on her business Facebook page, San Juan Parent. I immediately posted, “mine” underneath it and went about learning about her history and how I could adopt her. I talked to my husband and children about the possibility. The post said because Evelyn was believed to be 10 years old Telluride Animal Foundation would be willing to “sponsor” Evelyn by helping with vet bills and food costs for the right family.

I talked to my husband, extended family and children. I knew it was going to be difficult to open our hearts to a senior dog with the possibility of having her pass soon. We all felt like it was the right thing to do though. My oldest son said, “Mom, just because she is old does not mean she is worthless.” We decided to adopt her and give her the best few months of her life she would have!

I met a volunteer from Hoof N Paw Rescue at the park in Ridgway to pick up Evelyn. She was not a pretty girl at that time. She was very thin. Her nipples were between 1 and 2 inches long. Her hind quarters were weak. She was clearly nervous. It was December.

Her story as told to me by the volunteer was: Evelyn was at the Flea Market in Delta where her owners were selling her latest litter of puppies. The couple who wanted to purchase her last puppy were told they could take Evelyn as well as the puppy because if not, “they were going to put her down the next day.” The couple who bought her puppy did not necessarily want Evelyn but took her to save her life. They got her home and then relinquished her to Hoof N Paw where she went to a foster home. She and the cats did not get along at that foster home so she went to a new foster home for a few weeks before we adopted her. She was so “old” I had to load her up into the vehicle because she could not get in by her own strength.

We were her 5th home in a few short months. Evelyn and Scooter were not fast friends, however their relationship grew to be very warm and close. Evelyn could barely pull herself up onto the couch with her front leg body strength. When she would get off of the couch her back end would drag a bit before she could pull her back legs up and under her. We took the dogs for a very short, half mile, hike a month after we got her and she limped for three days. We all assumed we would have her for about 6 months before she passed with the shape she was in. 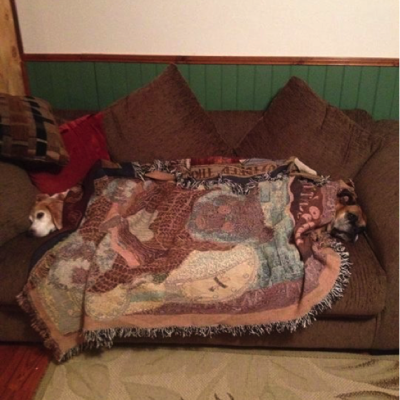 We continued to take her for shorter walks and as the days and weeks went by she gained weight and slowly grew stronger. Scooter and Evelyn would play together and would cuddle up together on the couch holding each other’s paws. She learned to tolerate, and then love our three outdoor cats. We took her with us everywhere we went because she was nervous she would be left or taken to a new home. When she became confident this was her forever home, after several conversations I had with her, she became more comfortable and able to relax. This process took over a year though. When we first took her for rides in the car she would stand and whine the entire way. Now she will ride and will sit or lay down in a seat.

To our dismay, Scooter became ill last year. We all thought he would outlive Evelyn when we adopted her. It started as an ear infection, then a nasal infection and grew into pneumonia. With the help of our veterinarian, surgery, emergency visits to the vet, oxygen, and lots of medicine and x-rays Scooter fought and fought. For almost a year he would become very weak and sneeze and breathe shallowly and not get off the couch for days, then he would rebound and begin to eat, play and wag his tail and jump and run with Evelyn.

Scooter slipped peacefully from this life curled up in bed during the night with our oldest son, whom he slept with from the day we got him. He was one of the goofiest, kindest, skip to the beat of his own drum souls I have ever met in a dog.

Within months of Scooter passing Evelyn needed vet care. One of her longest nipples had a lump under it from the time we adopted her. Suddenly it began growing aggressively. It caused so much pressure on the skin that her skin was starting to rupture, became infected and would bleed. At that point the vet said if we didn’t do surgery and remove it she would die from the infection it was causing. That would be the only reason to do surgery on a dog of her age. I agreed to the surgery and was discussing the cost and follow up care with the assistance at the vet office, when I remembered Telluride Animal Foundation may be willing to help us with her surgery bill.

Up to that point we had cared for Evelyn, paid for her food, medicine, supplements, and annual vet care. I contacted TAF and asked for help. When we initially adopted Evelyn the offer of sponsorship for vet care was a factor as we were aware of the health situations in older dogs, specifically the Boxer breed. We knew we would not ask for help for everyday care and assumed we would not ask for help at all unless it was out of our financial ability. TAF’s vision and understanding of what people may be concerned about when adopting a senior companion and their compassion to offer sponsorship made her adoption into our family a reality.

We have loved having her as a part of our family. She is now healed up from her mastectomy and receiving follow up medicine to keep her as healthy as possible. She hikes for up to 8 miles with me now and does not have a limp. She visits the residents at the Homestead, where she gives and receives love. I can only assume she was kept as a breeding animal in a crate or small dog “run” for her whole life and when she was useless to have any more puppies for profit of the owner they were going to destroy her.

I am so grateful for the vision the founders and board have at TAF. As a family we have supported them in their fundraising efforts, shared rescue stories, and events with family and friends, and will continue to do so.
I will never own another animal that is not a rescue animal. As the TAF shirts say, “My Favorite Breed is Rescued.” 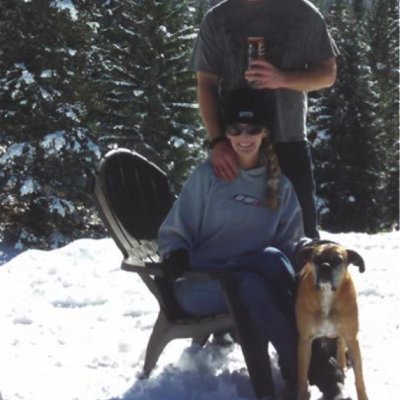