From Gallup with love! 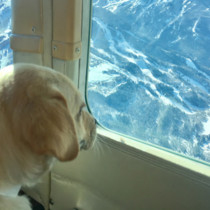 It was a chilly Tuesday morning when Josh and Katja Rapaport, the founders of Telluride Animal Foundation, touched down at the Gallup Airport with the mission of saving a few lives.

Eleven young rescued canines, including Sophie and her three puppies – Stieg, Saul and Sally were among the lucky selected to fly up to Aspen, Colorado. And Jade, the cream colored lab mix puppy got the trip of a lifetime – she sat on Co-Pilot Katja’s lap for the entire 1.5 hour flight, occasionally looking down at the plains and mountains from as high as 10,000 feet.

Jade is one of Gallup-McKinley Humane Society’s five puppies that boarded the Cessna 210. They were rescued from the Pinehill area and will now find their forever homes thanks to GMHS Transfer Coordinator Kristine Gruda.

All of the dogs were taken to the Aspen Animal Shelter. 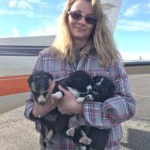 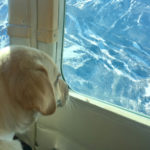 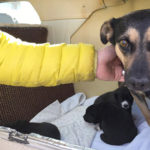 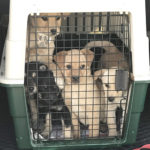 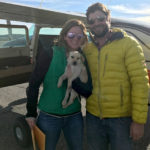 Gruda said out of GMHS’s 3,984 intakes in 2016, they tranferred out 3,010 animals, and had local adoptions of 407. The rest were owner retrievals and euthanasias. “We really only euthanize feral/aggressive animals or animals that have severe health issues,” she said.

“I definitely thank the Telluride Animal Foundation for their donations to our cause, and for helping to support our spay and neuter clinic,” she said.

Also on the transport were three-month-old puppies Lilo and Stitch. Sophie was rescued from the streets and later gave birth to her three puppies. This group was fostered by David Tom and Babette Herrmann of Rez Dawg Rescue. Tom and Herrmann also run the fledging non-profit, Four Corners Pet Alliance, which raises funds to help supplement the care of their many fosters.

Katja Rapaport said Telluride Animal Foundation was founded in 2011, and funds the spay and neuter clinics for Soul Dog Rescue and other groups. When the couple landed in Aspen, she said, they received a heartwarming reception.

“We got treated like royalty,” she said, adding that volunteers were holding the puppies, and a Aspen Daily News photographer was on the tarmac snapping photos. A photo of Pilot Josh Rapaport and Sophie made the front page of the newspaper.

The couple has flown about a dozen rescue trips over the past several years, moving dogs and some cats on to better lives. The transport prior to the Gallup run involved flying a dog to the east coast.

“I am a bleeding heart dog lover,” Katja Rapaport said.

“All of the flying we do is pro bono,” she added.

Angela Cerci, executive director of Rez Dawg Rescue, worked behind the scenes to organize this transport.