TAF was excited to take part in the recent rescue of 7 horses from an abusive situation, they were not being fed or receiving proper veterinary care.  Thanks to a few concerned neighbors four of the seven are now at the Mt. Peale Animal Sanctuary, with the remaining three to follow shortly.  Here is a description of their release at the sanctuary by Judy, a volunteer who coordinated the rescue efforts:

The 4 horses arrived at Mt. Peale Animal Sanctuary Monday afternoon. Teague said that when they were put in their respective (large) areas, and the hay and feed was there for them, the humans could see the horses visually relax – they knew they were home. Noelle, from Norwood, and I delivered the sacks of grain today, and spent an hour brushing the old boys. I don’t think I ever saw 2 horses love being groomed so much. We probably pulled off at least 50 ticks, and a pile of burs and old, old hair. Friday, the other 3 horses will be delivered – an injured weanling and 2 fillies (in poor shape the last I saw them). A story with a great ending. Thank you all for your concern and help. 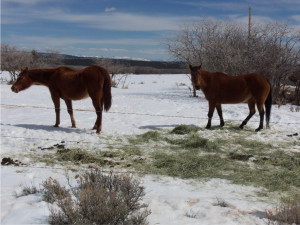 The girls – Pepper & Lassie settling into the sanctuary.