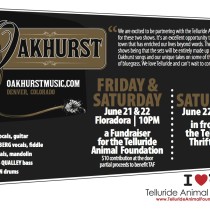 Bluegrass fans and animal lovers unite on Friday, June 21 and Saturday, June 22 at Floradora at 10 PM for a bluegrass jam to benefit the Telluride Animal Foundation tellurideanimalfoundation.org.

“We are excited to be partnering with the Telluride Animal Foundation for these two shows,” said Chuck Hugenberg, vocalist and fiddle player for Oakhurst. “It’s an excellent opportunity to give back to a town that has enriched our lives.”

The shows will feature original Oakhurst songs from their 5 albums and the bands unique take on traditional bluegrass music. Admission is $10 at the door with a portion of the proceeds to benefit the Telluride Animal Foundation.

The Telluride Animal Foundation started in March of 2011 with its first fundraiser the Disco Ball Fundraiser that raised $12,000. Katja Wichland and Josh Rapport founded TAF and by the end of 2012 the organization run mainly on volunteer support donated $169,000 to animal rescue causes.

Telluride Animal Foundation is working to drastically reduce the numbers of animals that are euthanized in shelters annually by focusing on making spay and neuter affordable and easy for residents of Southwest, CO.

“Our mission is to bring the number or homeless pets to zero and we are thrilled to partner with local rescue groups and volunteers to make this dream a reality in Southwest Colorado,” said Katja Wichland, founder of the Telluride Animal Foundation.

The Thrift Shop raises funds to support a wide array of programs from spay and neuter clinics in Colorado and beyond; shelter and hay for horse rescue groups; much needed equipment for spay and neuter clinics; and the purchase of four new indoor/outdoor kennels for Black Canyon Animal Sanctuary, allowing them to take in more unwanted dogs.

A tough economy and strange weather have had a devastating affect on pet companions.

Many families are finding it difficult to pay for food and veterinary care, while record high temperatures and persistent drought has lead to meager grain crop and increased hay prices. The increasing costs of pet ownership and reduction of wages has forced many owners to relinquish their pets to shelters, adding to pet overpopulation.

The Telluride Animal Foundation started a pet food bank at the Thrift Shop and also started a fund for helping families with medical costs for their pets. In addition to the domestic-pet food bank, TAF sponsors a hay bank in nearby counties that provides free hay to owners that are struggling to feed their horses. In 2012, TAF donated $35,200 to hay banks.

“Our goal is to support families as they ride out these difficult times,” added Wichland. “We want to help owners keep their horses and pets rather than relinquish them to already overcrowded shelters and rescue groups.”

There are always great items available for purchase at the Thrift Shop from gear and household items to clothing for everyone. The store accepts donations of gently used items and is open 7-days per week. To volunteer or donate, contact Rachel Loomis Lee through tellurideanimalfoundation.org or at the shop 970-728-1100.

Oakhurst will be performing in front of the Telluride Thrift Shop at 335 West Colorado Avenue on Saturday, June 22 at 2 PM. Come out to support the Telluride Animal Foundation while listening to great Bluegrass music.