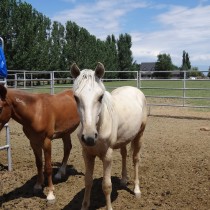 Blanco and Star are just two of the horses at the Dream Catcher Therapy Center that have been rehabilitated by the amazing team there with financial support from the Telluride Animal Foundation. Their lives converged at Dream Catcher where Kathy Hamm rehabilitates horses. Blanco, a palomino yearling colt was rescued earlier this year from a livestock auction in Cortez, Colorado. He became separated from his mother and was about to embark on a scary journey to Mexico where he would have been another statistic of the meat trade.

Star arrived at Dream Catcher several years ago after Dr. Grady; veterinarian for the State of Colorado rescued him from an individual that had repeated offenses against animals. Star arrived with two other horses; she was the youngest of the group and also the hardest to reach and didn’t want to be touched at all. Malnourished, covered in fleas and exhausted from mistreatment, Kathy and her team had their work cut out for them. But, with patience and care, they were able to rehabilitate Star into the most patient, gentle mare that she is today.

This spring Kathy noticed a lump in Star’s neck and took her to see Dr. Bohanon of the Glenwood Springs Animal Hospital. He said with the right care her recovery would be about 70%. She had surgery last week and is back at the center recovering nicely.

“We’ve been working closely with Kathy supplying hay and other needed supplies but when she told us about Star and her surgery we knew we needed to help,” stated Katja Wichland, founder of Telluride Animal Foundation. “There are many horses available for adoption, Dream Catchers also has 15 mustangs that were rounded up last fall by the BLM and they would appreciate any volunteer support or donations.”