Lawsuit Against the BLM 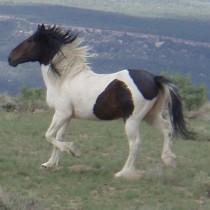 The Telluride screening of the extraordinarily moving documentary film “Wild Horses & Renegades” by James Anaquad-Kleinert has sparked a groundswell of outrage and activism. Two weeks after the Telluride screening, the BLM held a helicopter roundup of wild horses in Spring Creek Basin, near Telluride. These very horses, and the violence of the last helicopter roundup in 2007, were featured in Anaquad’s film.

Unprecedented numbers of people attended and personally observed the Spring Creek Basin helicopter roundup, and they experienced first-hand the BLM’s cruelty and illegal conduct. Incredibly, this outpouring of local volunteer effort will lead to saving every single one of the un-adopted wild horses captured from Spring Creek Basin (except for two horses that were injured and euthanized in the BLM’s process). Twenty-four horses will be spared years of feedlot-style captivity, and worse, slaughter in unimaginably inhumane conditions in Mexico.

The film also generated support for a lawsuit filed in the federal District Court of Denver that challenges the Spring Creek Basin roundup due to the BLM’s violations of the 1971 Free Roaming Wild Horse & Burro Act, the National Environmental Policy Act (NEPA), and the U.S. Constitution. The plaintiffs include James Anaquad-Kleinert and Spirit Riders Foundation. The defendants are Ken Salazar (Secretary of the Interior) and numerous BLM officials.

In the suit, the plaintiffs are asking the Court to require the BLM to:

Lawsuits against the BLM under the 1971 Free Wild Roaming Horse & Burro Act are recent and rare. Kleinert vs. Salazar represents a unique opportunity to fight back against the BLM and its inhumane and illegal mismanagement of America’s wild horses. A successful lawsuit would be precedent applicable to other roundups, making it a game changer for the American wild horse and its advocates.