And he lived happily ever after. 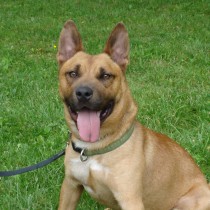 Nikki here. I just wanted to share with the TAF community a little miracle that happened recently. So much about animal welfare is hard to take, we need to rejoice in the victories when we get the chance!  The story is a bit long, but I promise the ending is worth the wait!

In February of 2011 I lived in Tennessee and volunteered at a local shelter.  It was there that I met Bert, a 2 YO pit mix that came into the shelter as a cruelty case. When Bert first arrived he had a chain embedded in his neck from living on the end of a chain since he was a puppy. Needless to say, he was rather unsocialized and not highly adoptable. He was in the shelter so long that he developed the pitiful habit of spinning in circles for hours on end – to put it bluntly he lost his mind.

I sat one day and watched him spinning, and I knew I had to do whatever it took to get him out of there.  Bert came home with me that day, and our long journey began.

I took Bert on as a foster and quickly learned that he and my male dog were never going to see eye to eye. We had to keep them separate at all times, which was a challenge in a 1 bedroom apartment! I slowly saw the toll that 2 years of abuse had taken on Bert. He was petrified of men and wouldn’t go within 10 feet of my husband. He was socially awkward with other dogs, and even fearful of walking through doorways!!

I worked with him daily and networked like crazy to find the perfect fit for my boy Bert. Months went by with no luck. I decided to get him enrolled in an intensive 2 week training program with the trainer who had turned my dog from completely feral to a well-behaved cuddling machine!  Thanks to numerous angels along the way, Bert emerged from training a much more well-behaved and confident dog!

With his new-found skills I took Bert back to the shelter for some exposure. I was spending the summer in London, and was so sad to leave Bert behind.  The shelter staff promised to take great care of him and to work with him on his new obedience skills.  When I returned from London I was overjoyed to hear that Bert had been adopted.  Since he had finally found his happy ending I decided to foster Daphne, a pitiful white Pit mix who had been in the shelter the longest of any resident.  *Who ended up becoming a permanent member of our family* 🙂

Three weeks later Bert was found wandering the streets with no collar.  His owners never came to claim him, and it was back to waiting and spinning in the shelter for Bert.  Since I had already taken on another foster I decided to dedicate all my time to networking Bert and trying to find him the perfect home.  We put pics out on Facebook, Craigslist, Petfinder…everywhere and anywhere.  And it worked!  Bert found his match, a SAINT of a man named Barry who was looking for a new best friend.  He and Bert would live alone together and be each other’s constant companion.

As Barry was guiding Bert into his home, Bert managed to slip his collar and he was gone.  When I heard this news I was in utter disbelief, I had just finished sobbing about Bert’s happy ending and now it seemed as if Bert was destined for a difficult life.  We spent 4 days canvassing the neighborhood and plastering flyers up everywhere.  On the fifth day I got out of my car at Barry’s house and decided to shout for Bert, I knew it was a long shot but I was desperate.  Amazingly, I saw his head pop out from around the neighbor’s house.  I sat down on the ground and called for him, and thankfully he recognized me and made a b-line straight at me.  What a joyful reunion!  I am happy to report that this is where Bert’s dreadful saga ends.  After he was reunited with Barry it was all smooth sailing.  It has been over a year since I have seen Bert’s smiling face, and I was overwhelmed to find this letter in my email a few days ago from Barry:

I just wanted to give an update to those that remember a dog I adopted in November last year. His name is Bert and he was a rescue with a chain embedded in his neck and severely emaciated. He was in the news and papers when he was discovered and a lot of people I talk to remember seeing articles or hearing about him.

I couldn’t be happier that Bert and I are together! He is my best friend and I can’t even remember what life was like before him. He is such a well behaved dog and that just came naturally it seems. I don’t worry in the slightest about him getting into anything he’s not supposed to.

He stays inside but enjoys his time in the fenced in back yard. He loves to roll onto his back on a hill in the yard, kick his back legs up and down in the air, causing him to slide down the hill on his back. He loves to go for rides in the car, even if we’re going to the vet. He enjoys the vet or any other place there are other dogs. He has a girlfriend that lives next door that he likes to show off for. They enjoy playing together, even when it’s through the fence.

He likes to sleep on the couch next to me when I’m watching tv and next to me in the bed at night. He looooves getting his belly scratched every chance he gets! When he’s sitting or lying next to me, he wants to be touching me in some way – usually with a paw on my leg. He definitely wants human contact as often as he can get it and he gets plenty!

I am so thankful to everyone that gave Bert the chance for a new life. I know there were people from the shelter, at clinics, a foster home, and others that devoted time, money, and love to him and I want to give all of them a huge ‘Thank You!!’. I also want everyone to know that he is very well taken care of now and very loved too. I’m not sure if it’s Bert or me that is the happiest, but I would bet it’s probably me.

And he lived happily ever after.