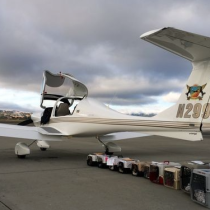 Wings of Rescue is a nonprofit rescue operation that transports dogs from high-kill shelters to rescues where they will have a better chance at being adopted. Founded in 2012, it began when two pilots who were already donating their time to a similar organization became frustrated with some of the rescue practices and felt they could be more efficient on their own. One of the founders and pilots, Cindy Smith, took a break from flying to give some more information on the awesome work this group is doing.

Check out the story here.